Learn How to Save Money at the Pump! ⛽️

Gas prices are on the rise…again 🙄 In this video, you’ll learn ways you can save money at the pump! Glen Hayward discusses ways to cut down on the amount of gasoline your vehicle expends, such as making sure your air filter is clean and don’t punch the gas when you’re at a stop! Punching the gas can cut fuel efficiency in half! Preventative Maintenance can keep your vehicle running longer, and more efficiently saving you money at the pump.

With a shortage of new and used cars
in the market, buyers may get duped into purchasing a car that has been damaged in a hurricane. Supply and demand issues that have plagued the car market for several years create the perfect storm for unscrupulous sellers to prey on vulnerable buyers.

Flooding caused by Hurricane Ian is expected to damage thousands of vehicles across the East Coast. Many of these vehicles could be moved far away from flooding and sold to unsuspecting consumers.

According to Carfax, about half of cars damaged in floods are resold. While it’s not illegal to sell a car that has water damage, the title should be marked “flood damage” or “salvage” (which signifies a total loss). Unfortunately, not everyone follows the rules. And according to Edmunds.com, a vehicle considered a total loss in one state might not require a salvage title in another state.

Even if the title doesn’t identify the vehicle as having flood damage, consumers should do their own fact-finding when looking at used cars. Engine computers, sensors, electrical connectors, and wiring are vulnerable to corrosion, expensive to fix and could endanger lives if water damaged. Plus, this kind of damage may not surface for years.

Here are a few tips to spot flood-damaged vehicles:

As always when car shopping, consumers should do a VIN check with the National Insurance Crime Bureau. The free service can identify whether a car has been reported stolen or labeled as salvage by insurance companies.

Flood damage can be hard to detect, but a trained and experienced auto repair technician can certainly help. To really protect yourself when buying a used car, it’s a good practice to have a trusted mechanic check out the vehicle before any money changes hands. While there may be a nominal fee to have a car checked over by a certified mechanic – it is a smart investment in the long run.

Glen Hayward is the owner of Good Works Auto Repair in Tempe and is a board member of the Neighborhood Auto Repair Professionals.

If the deal seems too good to be true, it probably is! Did you know it only takes a foot of water to cause flooding issues in your vehicle? Vehicles that were exposed to Hurricane Ian are making their way to Arizona, and flooding issues throughout the engine and fuse box can cost you lots of money in the end! When you are purchasing a used car, it is important to do your research! Sources like Carfax are great for checking the history of a vehicle you are looking at purchasing. Consider having a thorough pre-purchase inspection done by one of our experienced technicians when you are considering buying a used car!

Learn How to Keep Your Vehicle Longer

A car that is well maintained with preventative maintenance can last people years and miles! Keep up with your vehicle’s needs to keep it running as long as possible. If you are thinking of purchasing a used car, bring it into Good Works Auto Repair for a Pre-Purchase Inspection where we go over your vehicle from bumper to bumper and check the computer system within the car you are considering buying!

Buying a used car? Get a Pre-Purchase Inspection!

On Channel 3 News, Glen Hayward discusses how to protect yourself when buying a used vehicle. The average price for a used car is $30,000! If you are going to buy a used vehicle, consider having a Pre-Purchase Inspection done, at Good Works Auto Repair, we offer a Pre-Purchase Inspection for $100 so that our customers know exactly what they are getting when buying used.

Glen Hayward was featured on Channel 3 News to discuss how to keep your used vehicle longer! The average price for a used car continues to sky rocket! Many people are keeping their cars longer because the price to replace them is astronomical. To keep your cars running for a longer period of time the BEST thing for you to do is preventative maintenance! Keep your vehicle maintained with fluids, brakes, and tires to keep it running as long as possible!

Glen Hayward was featured on Channel 3 News to discuss how to prepare your vehicle for monsoon season. Here in the desert, our car batteries and tires wear down quickly because they are getting so hot! Ensuring your vehicle’s tire tread is thick enough is important for driving safely during monsoon season! Hydroplaning is a great possibility while driving on wet roads, your tire tread and driving slowly can help prevent this.

It is important to have your cabin air filter replaced fairly regularly, especially during monsoon season! When it starts to get dirty and plugged, it blocks the airflow to your car. This causes contaminated air to go to your engine which can cause damage. Good Works Auto Repair recommends doing this annually or every 15,000 miles. You also want to ensure your windshield wipers are operating properly. Performing regular vehicle maintenance is key in keeping your car running as long as possible!
To service your vehicle for preventative maintenance, make an appointment with us today!

During monsoon season, some of us forego the car wash! But keeping the body of your car clean is important! Adding a nice wax to your vehicle helps keep the dust from attaching to your paint. The protective coating leaves your vehicle less resistant to having things stick to it. When driving with your air conditioner during a monsoon, turn the defrost mode on if you notice your windows getting a little foggy!

Glen Hayward was on Channel 3 News discussing ways you can save money on gas by hypermiling and driving as efficiently as possible by driving the speed limits.

Glen Hayward was on Channel 3 News discussing ways you can save money on gas by making sure your tires are inflated and planning your trips using the shortest distance possible.

Don’t Get Taken For a Ride!

Does going to the mechanic make you nervous or feel uneasy?

Should You Buy a Used or New Car?

Looking for a used car or confused about auto repairs?

Glen talks to Channel 12 and explains how YOU can help avoid getting taken for a ride.

Glen was featured on Channel 12 News talking about different ways YOU can save money on gas, and keep more money in your wallet.

Interested in learning more? Check out the article here.

How To Maximize Mileage For Holiday Travel

(PHOENIX)– Drivers in Arizona are paying, on average, $1.52a gallon more for regular unleaded than they did one year ago. That’s 25 cents shy of the highest reported average record of $4.09 in 2008.

With consumers are paying more for gas, rental cars, and food, your Neighborhood Auto Repair Professionals (NARPRO) offer these steps to maximize mileage:

1. Slow down: According to the U.S. Department of Energy,each 5 miles per hour you drive over 50 mph is like paying an extra 20 cents per gallon.

2. Avoid sudden starts and stops: If you see a red light, ease up and coast rather than wait to brake. When the light turns green, gently accelerate. The U.S. Department of Energy estimates aggressive driving (speeding, rapid acceleration and braking) can lower your gas mileage by roughly 15 to 30 percent at highway speeds and 10 to 40 percent in stop-and-go traffic.

3. Lighten the load: Hauling cargo on your roof increases wind resistance and lowers fuel economy. You may also want to get the junk out of your trunk.

4. Avoid excessive idling: Turn off your engine when you’re parked. Idling can use a quarter to a half-gallon of fuel per hour, depending on your engine size and air conditioner use.

5. Use cruise control: this helps you maintain a steady speed on highways.

6. Check your tires: Properly inflated tires can improve fuel economy up to 3 percent, plus they’re safer and last longer. Follow the levels recommended by the automaker.

7. Keep up to date on maintenance. A dirty air filter restricts the flow of air in the engine, which lowers performance.

Glen Hayward is the owner of Good Works Auto Repair in Tempe and is a board member of the Neighborhood Auto Repair Professionals.

This past week Glen was featured on AZTV 7 talking about what Good Works has to offer and how our digital inspections, provided with every service, separate us from the rest.

Vice President Mike Pence met with local community and business leaders in Phoenix on Tuesday, October 3rd, 2017. Our own Glen and RaeAnn Hayward were there and had a nice sit-down with the vice president. He was in town talking about the need for tax reform. In his speech, he stated that President Trump wanted him “to listen to the job creators and to listen to the great leadership in Arizona about the best way to go forward.” What a privilege that Good Works Auto Repair was invited to join in the conversation! To read the full article please click here. 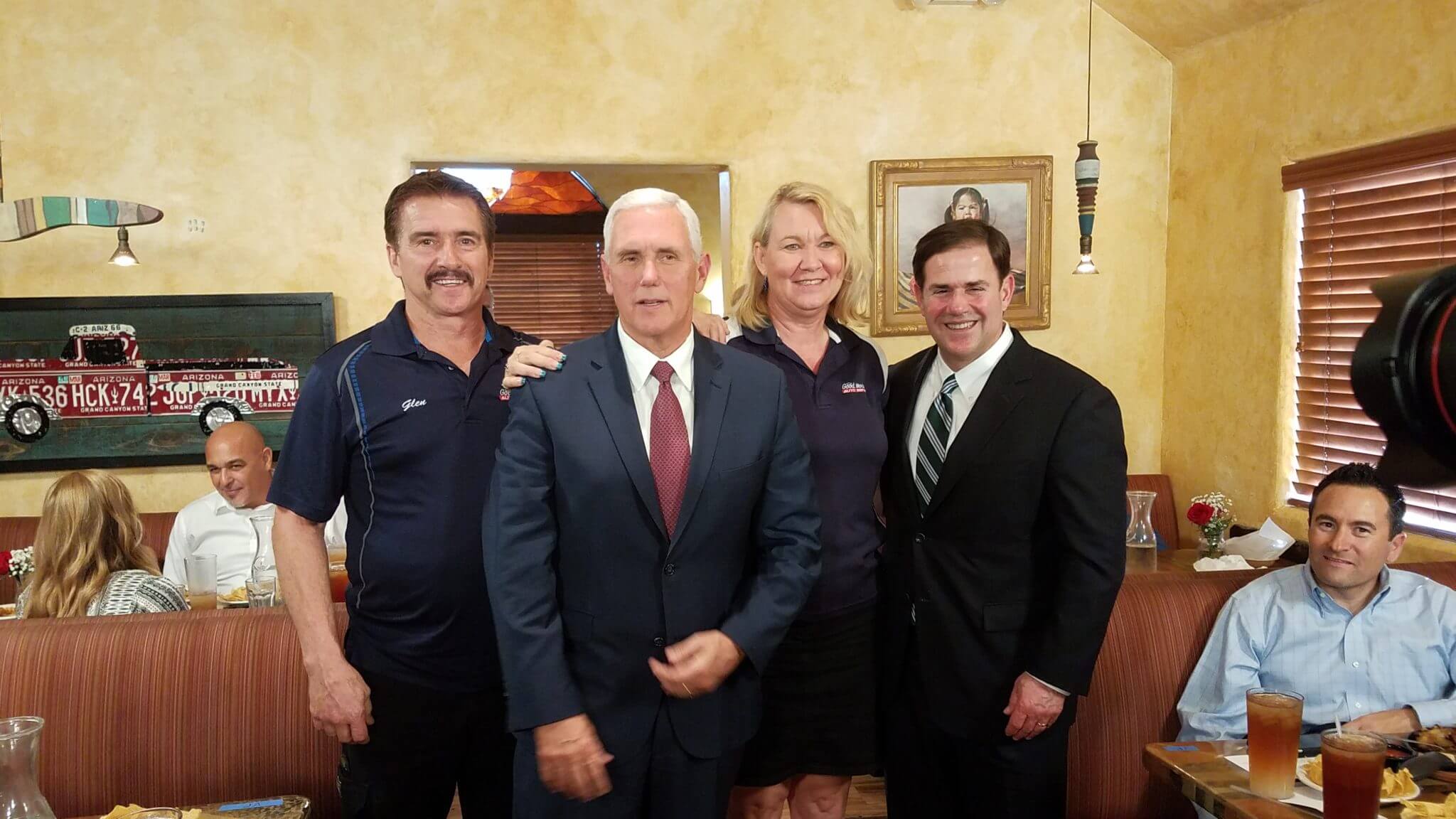 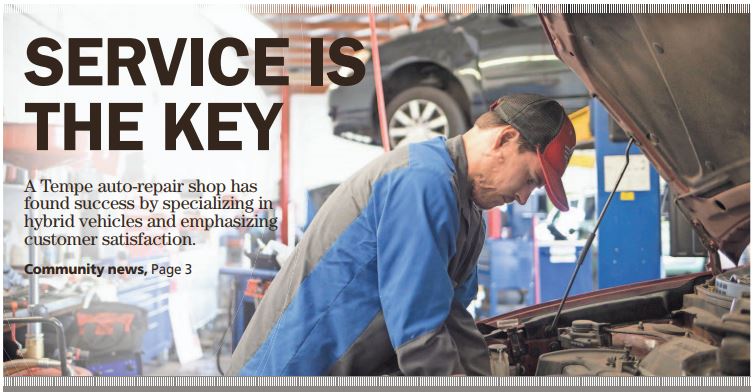 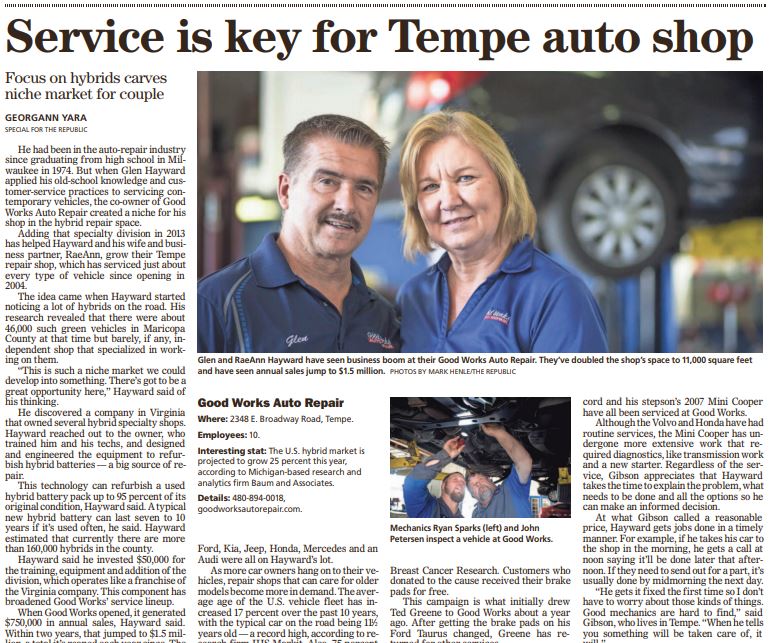 A Mom Thanks Glen

Glen shows us how to tell if your used vehicle has an unrepaired recall and what to do about it.

Hidden Water Damage to Your Vehicle

Your vehicle could be damaged from the recent storms – even if you didn’t drive!

Great advice for selecting a car for your teen from a reputable Auto Shop Owner.

How to Winterize Your Car with NARPRO

Make sure to travel safe this holiday season with help from your neighborhood auto professionals at NARPRO and Good Works Auto Repair. Be sure to check your tire tread, antifreeze levels and charge your cell phone before heading up north during these cold months.

On KTVK: No You Don’t HAVE to Replace Your Hybrid Battery!

Spending thousands on new hybrid batteries is a thing of the past. KTVK interviews Glen Hayward of The Hybrid Shop in Tempe – get ready to save money on your hybrid battery.

Driving through flood waters can be dangerous and very costly. Watch this video to understand what happens when you drive through water that is too deep.

Don’t Get Ripped Off!!

Save money at the auto shop winterizing your car!

Hidden Water Damage In Your Vehicle

Your vehicle could be damaged from the recent storms – even if you didn’t drive!

Don’t Get Stranded This Summer!!

How and when to check your tires and car battery.

How to spot potential cooling problems in the engine or A/C compressor.

Winterize Your Car with NARPRO

The neighborhood auto professionals at NARPRO & Good Works Auto Repair want to help you drive safe this holiday season. It is important to check things like tire tread, antifreeze levels, and charge your sell phone before heading out on the snowy winter roads during these cooler months.

Good Works Auto Repair recently teamed up with Channel 3’s The Surprise Squad and Helping Hands for Single Moms to surprise Shauna, a hardworking mother of two with a safe and reliable vehicle. Through a very generous donation from Glen’s mother, the car was provided by Good Works Auto Repair to Shauna after going through all of the inspections. Congratulations Shauna! Thank you for all of your hard work. The team at Good Works Auto Repair wishes you the best! 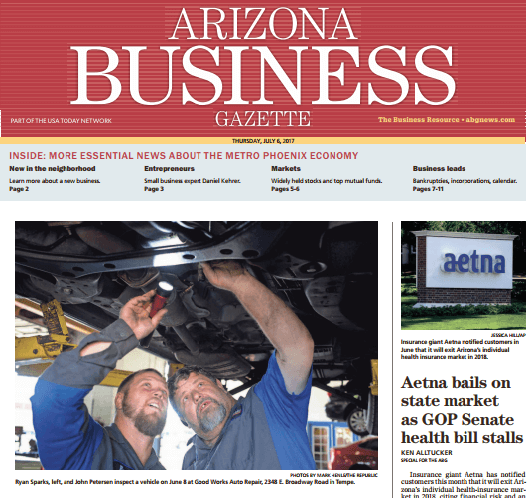